The Serpent Stone is one of the more striking of the works of the McGlashen stonemasons of late 19th century Edinburgh. It was carved as a gravestone for the Greenock-born merchant James Currie and his wife Jessie, née Campbell, born in New Orleans. It sits in the Edinburgh cemetery of Warriston, now a nature reserve thoroughly entwined in bramble and ivy.

The style is that of the Celtic Revival. The McGlashen family originally hailed from the Highlands of Argyll, and created a rich body of work in the old tradition now described as Insular Art. There was an upsurge of interest in such things in the 19th century, a consequence of the Victorian love for Highland culture. It was an upsurge that was to see a great many old, half-forgotten symbols brought out again into the light of day.

The serpents of Scotland are rare things, for the icy weather of the country is ill-suited to cold-blooded animals. Those that do manage to survive here, the harmless grass-snake and the darker, venomous adder, wait out the winter in hibernation underground. To the Highlanders of the past, it appeared that the animals were retreating into the otherworld in the cold part of the year, disappearing into the hollow hills the supernatural inhabitants of the landscape used for their dwelling. They travelled from the land of the dead to the land of the living and back again in the space of a year, mirroring the cycles of nature in the manner of their own destinies, and echoing the old druidic belief in reincarnation. For this reason, and for others too, a part of the aura of the otherworld attached itself to serpents, and they were viewed with some reverence.

The serpent was particularly associated with the goddess Bride, whose coming marked the beginning of the warm months of the year. At the start of spring, on the holy Day of Bride known in the old calendar as Imbolc, the serpents were believed to emerge from the earth. At this time it was the custom to sing a propitiatory song to it;

The early Irish text Cormac’s Glossary ascribes to the goddess Bride a triple form, and patronage over poetry, smithying and medicine. Later Scottish legend has it that traditional doctors gained the magical component of their healing powers by boiling a white serpent and drinking the resulting potion; the otherworldly beast of the goddess was thereby consumed, and a ritual transmission of her healing power achieved. 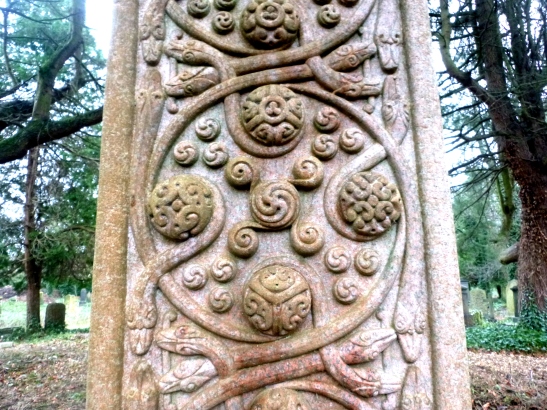 Serpents have a long history as components in the twining, swirling art of the Celts. They are among the animals depicted on the symbol-stones of the Picts, and they appear in the interlace patterns of later Christian stonework & illumination with some regularity. They fit neatly into the Celtic obsession with circles and motifs of the return; working easily as components of interlace patterns and, in the manner of their lives, mirroring the cyclical, repeating patterns of the triskel wheels.

It’s the disappearance of the circle that is perhaps the greatest difference between the way of life back then and our way of life now. In the old days, life really was a cycle, with the same experiences repeating over and over again from lifetime to lifetime. Children would grow to work the same fields as their parents, hunt the same beasts in the same forests; the salmon caught one spring in the pool was a guide to where, next springtime, another might be caught.

The lessons people learned in their youth were lessons they could teach to those who came after, because the challenges they faced would remain the same from lifetime to lifetime. Minds that can learn and adapt when young, but cease to do so when old worked just fine back then, because all the learning that was needed for many lifetimes could be done in the flush of youth, and recounted in old age.

This is so no longer. The circle has been broken. The lessons I learned about how to live as a young man in the 1990s & 2000s will mean little in practical terms to my children when they follow after me. The lessons of that other world where the internet mattered little, where careers now fading into obsolescence were once of considerable value, where a great peace prevailed in the aftermath of the fall of the Berlin Wall, all these lessons mean less and less now. The wheel will not turn again to 1996, and no-one will ever need to know where the best record shop was in central Scotland, however much it might have mattered then.

When and if I grow old, I will be a relic, not a source of useful wisdom to be consulted. This was not the case, once, in  a time when the circle held sway; when the serpent came from the earth year on year bringing the message that everything that has been will return, and this was the will of the otherworld.

In divining the meaning behind the real world so well, we have ended up stripping our own, real lives of a measure of their meaning. Those lives are longer, richer, more infinitely varied than they could ever have been in the long, misty years of the cycle; but they become obsolete faster, and condemn us to an old age of irrelevance. There is a price to be paid for everything under the sun; the serpent & the circle have now become the symbols of what we lost, when we made the trade.

To see those symbols entwine amidst the ivy of Warriston, among the bones of the dead, seems very fitting indeed.

3 comments on “The Serpent Stone”

This entry was posted on March 5, 2017 by williamayoung in Celtica.