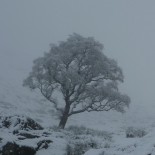 Edinburgh is a place for secret things. The city feels like a labyrinth; a maze of tangled stone in which the works of generations hide themselves. They pile up, layer upon layer, filling an unseen underworld with dust and memories. On its crags perch the relics of forgotten peoples; forts and stones with names in now unspoken tongues. It is an endlessly entwining pattern of ever-increasing complexity, that pulls you in and binds you to it with unbreakable knots. I may occasionally travel, but I know that I can never really leave.

One of the city’s secrets is this; along the banks of the Water of Leith, there hides in plain sight a gallery of art that no visitor visits and few residents remark. It starts but metres from the National Gallery of Modern Art, where afficionados of imagery daily congregate in numbers to gaze upon the artistic achievements of the modern age. As they do so, nestled in warmth and under the blaze of electric lights, nearby the wind is whistling through trees and tugging at ivy that together shelter a display as abstract, as complex and as coursing with meaning as anything held within the gallery walls. A forgotten thing, locked out in the cold.

The images in question are sculptures, executed in the Celtic style during the years of the 19th and early 20th centuries. Their drew their inspiration from an upsurge in enthusiasm for the native, Celtic school of art- an upsurge that emanated from two wildly contradictory sources. The first was called the Celtic Revival; the resurgence of interest in their own past that took hold among the minority peoples of the British archipelago during the 19th century, and which was ultimately to culminate in the independence of Ireland in the years following the First World War. The second, and entirely opposite influence derived from the patronage of the British Royal Family; Queen Victoria toured the Scottish Highlands extensively during the course of her reign, and her enthusiastic appreciation for its landscape and culture grew ever-greater as her reign drew on. Her interest made Scotland fashionable, and occasioned the spread of its traditional arts into elite circles. Tartan-clad ghillies and deer-stalking upon the moors became signifiers of artistocratic status; and the highborn of the land were soon very happy to patronise en-masse the resurgence of Scotland’s old Celtic aesthetic. The distinction in the treatment meted out to the two Celtic nations, Ireland and Scotland, may explain much about why one became independent, while the other did not.

So it was, with the backing of fashion and finance, that a school of art which had for centuries been the sole property of the tribes of the Highlands, suddenly began to appear in the heart of neo-classical Edinburgh. The nation’s long-running love affair with the strict lines of the Graeco-Roman world had grown stale, and it started instead to mark itself with swirling patterns akin to those that once adorned the faces of the tribes beyond the Wall. A minor Celtic Renaissance occurred, with intricate stone-work in the old, native style appearing in a volume and on a scale not seen since the end of the Dark Ages. It partook of the energies of Romanticism and Art Nouveau; but also remained true to a native tradition that preceeded and, indeed, helped to inspire both of those movements. It’s intricacies were at once modern and ancient; an expression of their time, and of a time long gone.

Such a climate created a gap in the market, ripe to be filled by artists skilled in the techniques of the Celtic tradition. Talented Highlanders, were they sufficiently enterprising, found they might turn their cultural inheritance to some profit; and a small stream of creative Gaels began to flow out of the mountains to the cities below.

The particular Highland artist whose legacy is relevant, above any other, to the work shown in this piece was a man called Stewart McGlashen. McGlashen hailed originally from Campbeltown, a township on the far western peninsula of Kintyre. Here the majority of the population were Gaelic speakers well into the 20th century, and the coast of Ireland lies closer in distance than the lowlands of Scotland. The son of a builder, McGlashen trained as a stone-mason; in the course of his work, he developed a rare facility for the entwining symmetry of Celtic patterning. He left the Highlands as a young man to seek his fortune in the cities to the east, finding a wife in Glasgow in the 1830s, and a home in Edinburgh in the 1840s. He and his wife Mary had 9 children all told, and established a family firm of masons that was to continue to turn out exceptional stonework for over a century. Not all of the work shown here is theirs- some is by other masons of a similar inspiration- but the greatest of the productions featured were all hewn by their hands.

There are two reasons the work of the McGlashens is not well-known to us today. The first is that simple universal of 19th century Britain; class. The McGlashens, for all their talent, were working class. They were not polished speakers, and could not discourse on the theory or practice of art. Lacking the skills to interact with the world of the cognoscenti, their productions filled no galleries, and no great exhibitions of their sculptures were launched. They were, instead, consigned to the role of artisans; and were employed to erect monuments in commemoration of the names of others, rather than works that could commemorate their own. The vast majority of their output consisted of grave-stones, erected principally in two cemeteries in Edinburgh to mark the resting places of wealthy merchants and politicians. They did not operate from a studio or a salon frequented by the fashionable sections of society; rather, they ran their business from a humble workshop, located beside the gates of the cemetery they served.

This matter of location is the second reason the McGlashens were condemned to obscurity. Cemeteries were not, a century ago, seen as appropriate places for exercises in artistic appreciation; even today, they are seldom viewed as pleasant places in which to spend an afternoon. Surrounded by the bones of the dead, the works of the McGlashens were for many years viewed by no-one but for occasional mourners- and their sombre gaze had little time for the intricate stones. As the years passed the ivy took hold, and the knots of the carvings were embraced in knots of green, the laboriously crafted surfaces fading from view. The work of the McGlashens was forgotten, and their name with it.

Today, the two principal locations featuring the work of the McGlashens are the cemeteries of Dean and Warriston, both sited along the banks of the river known as the Water of Leith. They are but two miles apart, with a footpath along the riverbanks rendering the journey between them a quick and pleasant one. The former now lies just behind the National Gallery of Modern Art, and has been carefully restored to a pristine condition. The latter is, in stark contrast, a nature reserve; and the stones that sit within remain entangled the grip of ivy and brambles that will never be cleared away. Their mysteries are forgotten and indiscernible; reduced (or transfigured?) into the ghosts of monuments, clad in shrouds of green.

The contrast between secrecy and openness, neatly-trimmed honesty and verdant occultation, has by by blind luck helped to create an appealingly varied platform for showcasing the work of the sculptors. Though they attract few visitors, both locations have a considerable degree of character. The Dean Cemetery features sweeping views over the west of the city, while Warriston is full of hidden corners and over-grown ruins. The latter is best avoided when it grows dark, however, as its solitude provides nocturnal succour for a variety of forms of urban iniquity.

These, then, are the forgotten galleries of Edinburgh; the exhibition halls of a dynasty of artists who resurrected the aesthetic of ages past. Their style itself, in a way, speaks of the possibility of a life after life has gone. Perhaps it has found its rightful place; as a secret promise of resurrection, guarding over old bones.

The legacy of the McGlashens sits unnoticed in plain view, transforming two quiet cemeteries into repositories of the art of the Celtic Revival. Their work’s appearance in Edinburgh marks a portion of the return of the Celtic culture from the lonely hinterlands of the Highlands into the intellectual heart of the nation. This revival is all the more inspiring in that it was not simply a case of an urban elite appropriating ideas from the fringes, but was instead occasioned by a family from the Celtic west moving from the fringes to the centre. They found themselves able to win their prosperity with the tools handed down to them by their forefathers; shaping a life in the modern age from the inheritance of the old. It is a tale that intertwines sadness and hope; complex as the crosses they carved, ambiguous as the ivy-clad shapes that are their relics. They deserve to be remembered.

Footnote: I am curious to know what became of the McGlashen stonemasons. Their business closed sometime between the 1950s and 1970s; it strikes me that somewhere in Edinburgh there is perhaps still an archive of their old papers and designs. If this is the case I’d be keen to find out, and to help try and secure their preservation for posterity. If anyone has any information, please do get in touch.

This entry was posted on November 16, 2014 by williamayoung in Celtica and tagged Art, Celtic, Edinburgh, Highland, Scotland.