The road to the Sangla valley is an exercise in faith & terror. Faith, in the ability of the elderly driver to steer his equally elderly bus along the twists and turns of the cliffside road, without plunging into the abyss below. Terror, in the frequent moments that he turns his gaze away from the road to continue a conversation over his shoulder- conversations that seemed to me just a little ill-timed.

The road into high Sangla is a spur of the Hindustan-Tibet highway, a highway that vies for the title of most dangerous on earth. So precipitous is the route it describes across Himalayan cliff-faces and ravines, that for much of its distance it would perhaps be more accurate to discard the term ‘road’, and replace it with ‘ledge’.

The view across the ‘valley’ through the bus window.

With an entryway so conducive to the contemplation of mortality, it is perhaps little surprise that the Sangla valley should be a land where religion is strong. It is both typical and atypical of India; typical in the diversity of gods honoured, and the range of temples erected; atypical, in that its gods are drawn equally from the Buddhist and Hindu religions. Sangla lies near the crest of the Himalayan range, on an old trade-route connecting Hindu India with Buddhist Tibet. Along this road came travellers from both lands, sowing seeds from their respective cultures that were to germinate into a diverse, colourful fusion of religions; a garden of exoticity, blossoming amidst the snows.

I came here to visit the temples in the spring of 2012, in the course of researching my book, ‘The Hidden Gods’. I was digging into the cultural linkages between esoteric Hinduism and esoteric Buddhism; and in Sangla, along with the lands of Bushahr and Kinnaur around it, I found a great deal of material. Here are a few snapshots of the valley, with a little detail on their place in the culture of Sangla. There are many unique little cultures that have formed in the isolation of the Himalayan valleys; this is one of the most visually dramatic, and well worth taking a look at if you should find yourself in the region.

In Sangla village itself, the main temple complex contains Hindu and Buddhist shrines side by side, within the same complex. The more elaborately painted buildings above with the pagoda-style roofs are Buddhist foundations, heavily influenced by Tibetan culture. The wooden shrines with the curving slate roofs are temples in the Hindu tradition.

The temple complex is named the Bering Nag Temple. The Nags (Sanskrit ‘nagas’) are serpent-spirits associated with the mountains, and their images are prominent all over the temple. They are considered to be the inhabitants of a subterranean otherworld, possessed of great wealth and of great knowledge. The serpent image can also represent the esoteric Kundalini; a magical/mystical power held by certain sects powerful in this region to dwell within the human body. The activation of this power is the goal of many meditative systems, and is believed to result in anything from spiritual enlightenment to the acquisition of dark, magical abilities.

Elaborate woodcarvings are a feature of art in this region; the thick, primordial pinewoods that coat the Himalayan slopes provide a ready source of suitable timber. In this case, the shrine shown is a Buddhist one; though most of the symbols are common to both religions. The dragon motif is common hereabouts, combining features of the Hindu Nag with the imagery of the Chinese dragon that has come to occupy such a prominent place in Tibetan art. The swirling, interconnected patterns visible are part of a common Eurasian tradition of decorative art, connecting Arabesques, Celtic illumination and Armenian Khachkars to the ancient art of India. The swirling patterns carved into the wooden walls of the stave-churches of Norway find their Eastern counterpart here. 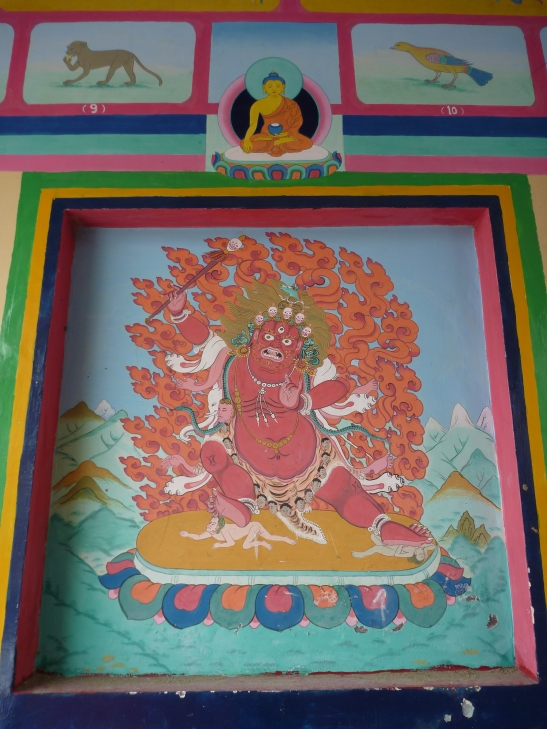 This painted image is of a Tantric Tibetan deity; a ‘Wrathful’ spirit of a terrifying nature, bound by oath to destroy those who would harm the Buddhist doctrine. Its garments are composed of the flayed skins and body-parts of men and animals, while it wields a skull-tipped club and dances on the bodies of its enemies. Such deities descend from Hindu originals; in early medieval India, frightening spirits associated with the Lord of Destruction, Shiva, were co-opted into the service of the Buddhist religion on the basis that they had ‘seen the light’ and converted to the Buddha’s doctrine. In this fashion, the supernatural entities that people feared were brought into the service of Buddhism, alongside those that they adored.

This image shows a painting in the Hindu tradition, displaying the sun-god, Surya, in the top right, and the Mother Goddess, Durga, in the top left. Durga is one of the cultic foci of the Shakta branch of Hinduism; a branch that reveres a universal Goddess as the supreme deity of the universe, rather than any of the male gods of Hinduism. This tradition is particularly strong in the Himalayan region. Beneath the two Indic deities is a dragon, heavily influenced by the artistic style of the Tibetans across the border. Once again, the cultures combine. 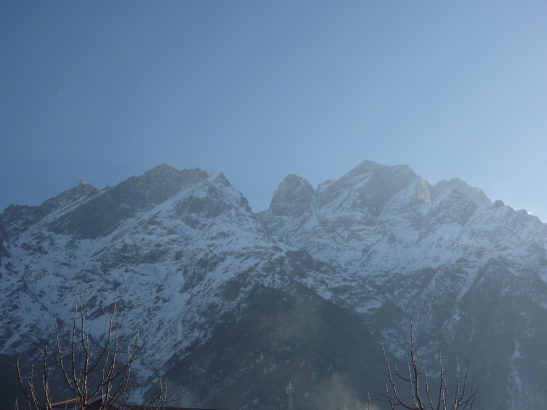 Behind Sangla rise the outlying mountains subsidiary to the great peak of Kinner Kailash. In this region, Kinner Kailash is revered as the abode of Shiva, the Lord of Destruction. It is held that he meditates amidst the snows, and, through imagining the world, brings it into being. At the end of time he will arise from his meditations to dance; and in the process will bring about the destruction of the universe. Pilgrims travel vast distances to circumambulate the mountain, signalling their devotion to the god through their willingness to endure the cold and the risk of altitude-sickness. 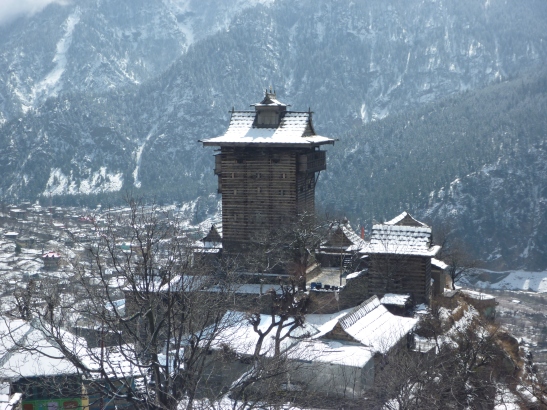 Perhaps the most dramatic human construction in the Sangla valley is the tower-complex known as the Kamru Fort. The fort was the original capital of the kingdom of Bushahr; a state that ruled substantial stretches of the valley country between the middle ages and the modern era. Above the gateway, a stone image of the Buddha gazes down benignly upon those who wish to enter. Within the tower, meanwhile, is housed an icon of the Hindu goddess Kamakhya; a rather less benign figure, principally worshipped in bloody rites in a great temple far to the east in the jungles of Assam. Her idol was brought from that land many centuries ago, and helped to instill in the valleys of Bushahr a reverence for dark and violent goddesses. In the fullness of time, the seat of the kingdom was transferred to Sarahan further south, in the Sutlej valley, and the Kamru Fort declined in importance. It remains intact to this day, however, a monument to the earthquake-proofing skills of the medieval Indians who so skillfully constructed it from layers of wood and stone. Very few are the times I have come across a structure as impressive, or as redolent of eras past, as this.

Practicalities: The Sangla valley is located within Himachal Pradesh state in northern India. I reached it using the bus service; travelling from the state capital of Shimla north to Rampur, then connecting on to Rekong Peo, and finally onto the local service to Sangla. The entire journey is inordinately memorable, passing through staggering expanses of mountain terrain and deep, rocky gorges. I arrived in early Spring, when the lingering grip of winter meant there was as yet no running water or electricity. During the summer months, when hikers arrive, the amenities are rather better. Accomodation is exceedingly cheap and easy to find; the food is an interesting twist on the normal Indian fare, featuring a number of Tibetan specialties such as ‘momos’ (dumplings) and ‘thukpa’ (noodle soup) which are really very tasty indeed. While Sangla is certainly not a place for those who enjoy their comforts, if you’re looking for somewhere that offers both beauty & culture, then it delivers them both in spades.

View up the valley, towards Tibet

This entry was posted on October 11, 2014 by williamayoung in South Asia and tagged Buddhism, Himalaya, Hinduism, South Asia.